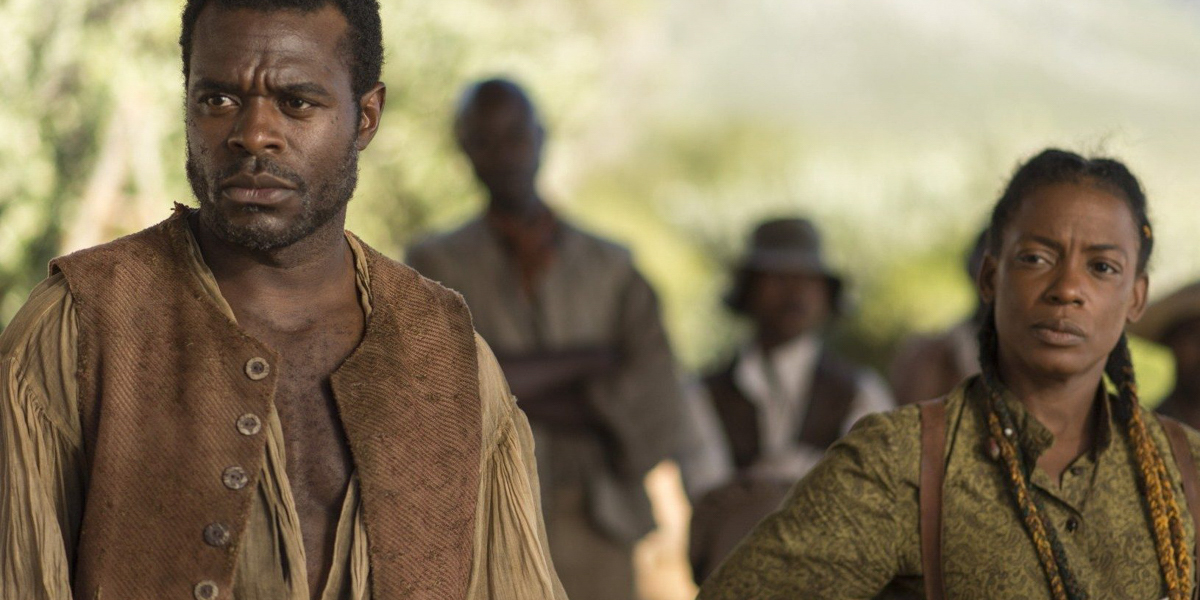 This CBC mini-series is based on the internationally celebrated novel by Canadian author Lawrence Hill. A compelling tale of loss, courage, love and the triumph of the human spirit, it follows the extraordinary journey of Aminata Diallo (Ellis), an indomitable African woman.

In 1750, 11-year-old Aminata is kidnapped from her village in West Africa and begins a rich journey that takes her through the harrowing ordeal of slavery, to the turmoil of the American Revolution and ultimately to freedom in the British colony of Nova Scotia. Brilliant and determined, Aminata is a remarkable heroine whose unshakeable connection to her own African heritage guides her over unimaginable obstacles in her quest for freedom and ultimately allows her to assume the mantle of leadership for which she is destined.

Deeply moving and inspiring, The Book of Negroes explores painful historical realities through the unblinking eyes of a strong female protagonist whose story will stay with you long after the telling.

Virgo rose to prominence with his first feature, Rude, which premiered at the Cannes Film Festival and garnered two Genie nominations. He has also directed the films Poor Boy’s Game and Lie With Me, and hit TV shows such as The Wire, Regenesis and The Listener. He recently produced the show Greenleaf and directed episodes of Empire and Billions. His most recent film, Brother, premiered at TIFF 2022.

Paul is a cartoonist who lives with his girlfriend and their little daughter. His in-laws are a large, joyful clan with a much loved patriarch, whose health is failing. Based on a graphic novel of the same name, Paul à Québec is the touching story of a family coping with life’s troubles with courage, tenderness and lots of love.

Film and TV director Bouvier was nominated for the Best Director Genie in 1990 for his film Les matins infidèles. Since then, he has directed numerous television shows and films, including Histoires d'hiver and Maman Last Call, starring Patrick Huard. He recently directed the TV series Ruptures and the film La Bolduc. Currently he is completing work on the film La Cordonnière.

Grant Mazzy (McHattie) is a big-city shock radio DJ who has lost his job and moves to the small Ontario town of Pontypool, where he frustrates his new station manager, Sydney (Houle).

Nothing ever happens in Pontypool, so when Mazzy arrives at the station to start his show one wintry morning, he and his team are surprised by strange reports from town.

The station’s tiny crew find themselves holed up in their church basement studio, trying to piece together what’s happening outside as disturbing details pour in. Callers are making very little sense, and it seems like the English language itself is infected with a strange virus.

“McDonald knows it’s the things you don’t see, but only imagine, that best chill the blood.”
— Peter Howell, Toronto Star

McDonald directed the cult hits Highway 61, Roadkill, Hard Core Logo, The Tracey Fragments, starring Elliot Page, Pontypool, and the award-winning series Twitch City, episodes of Degrassi and Heartland. His recent films include Trigger, The Husband, Hellions, Weirdos and Dreamland. He recently directed the series Creeped Out and Malory Towers and is currently working on the films Switched at Death and I Have a Bad Feeling About This.

Barney’s Version tells the story of Barney Panofsky, played by Paul Giamatti in a Golden Globe–winning performance. As he progresses from young adulthood to old age, Barney ricochets from one romantic entanglement to another, trying to keep his outrageous father (Hoffman) under control while being pursued by a cop who suspects him of murdering his best friend, Boogie (Speedman).

Based on Mordecai Richler’s Giller Prize–winning bestseller of the same name, this rich and hilarious film won seven Genie Awards and was nominated for an Oscar.

Lewis’s television credits include episodes of Due South, Power Play, Beggars and Choosers, CSI: Crime Scene Investigation, Person of Interest and many others. His critically acclaimed debut feature, Whale Music, won four Genie Awards. Recently, he has been directing for television, including episodes of Westworld and Penny Dreadful, and is currently producing the series Trigger Me.

Les Plouffe is an adaptation of Roger Lemelin’s WWII-set novel, chronicling seven years in the lives of a poor family living in the Basse-Ville area of Quebec City.

This is kitchen-sink drama at its most satirical, dramatizing an entire era in the quirks of this memorable clan. The lovable characters and unforgettable moments make Les Plouffe a simultaneously sad, funny and loving account of life in WWII-era Quebec.

Adapted from Sheldo Currie’s novel The Glace Bay Miners’ Museum, this poignant period drama looks at a small mining town in 1940s Cape Breton, Nova Scotia, where Margaret (Bonham-Carter) grows to despise the mines in which both her brother and her father lost their lives.

As she mourns her losses, Margaret meets and falls in love with Neil (Russell), a bagpipe player who is just as disdainful of the local industry as she is. While Neil vows to find work outside of the mines, it proves tragically difficult for the couple to escape the realities of living in a mining community.

Based on the award-winning novel by Canadian author Rohinton Mistry, Such a Long Journey is the story of Gustad Noble (Seth), whose life is thrown into turmoil when he is asked by an old friend to deposit a large sum of money at the bank where he works. Set in Bombay on the eve of the war between India and Pakistan, Gustad’s troubles become an allegory for the chaos and upheaval occurring around him.

His son would rather become an artist than attend engineering school, his daughter has malaria and his wife (Razdan) spends an increasing amount of time with a neighbour that he fears is a witch. On top of all this, the local government threatens to tear down the wall surrounding his housing complex. Ingeniously, Gustad asks an artist (Chowdhry) to paint a multi-faith mural on the wall so believers of all religions will be compelled to save it. A rich and thoughtful portrayal of the power of spirituality and how to overcome even the most daunting of circumstances.

Born in Iceland and raised in Vancouver, Gunnarsson earned an Oscar nomination for his debut feature doc, After the Axe. His films include Beowulf and Grendel, Force of Nature: The David Suzuki Movie and Monsoon, and he has directed hit TV shows such as Motive, Degrassi: The Next Generation, The Art of More, and most recently Schitt’s Creek and Ransom.

When Arctic bush pilot Charlie Halliday (Pepper) is given two rare walrus tusks by a group of Inuit, he agrees to fly a mission of mercy, transporting a sick girl (Piugattuk) to a hospital. It’s the early 1950s, and the brash pilot has flown through the Arctic for years without seriously thinking about the people who live there or how they survive.

Everything changes when Charlie’s plane goes down in the wilderness, leaving him alone with the young girl. Forced to rely on each other, the two form a bond of friendship as the summer months quickly end and winter’s harsh conditions begin to take hold. Based on a story by acclaimed Canadian author Farley Mowat, this is a beautifully rendered tale, set in the gorgeous but desolate Arctic. Director Smith played a key role in an earlier Mowat adaptation, Never Cry Wolf.

Actor/director Smith is known for roles in the 1973 classic American Graffiti and The Untouchables. He has directed episodes of Buffy the Vampire Slayer and Da Vinci’s Inquest, and his films include Stone of Destiny and Dolphin Tale. He directed A Dog’s Way Home, and most recently A Christmas Gift From Bob. He is currently completing the film Maybe This Time.

Based on a true story, Joanna (Margaret Qualley), an aspiring writer, takes a job at a literary agency in New York that represents the notoriously reclusive writer J.D. Salinger, and is tasked with responding to his many fan letters. While it begins as a tedious desk job, she finds herself taken in by the letters and decides she wants to help the fans get their letters to their idol, going against the wishes of her strict manager (Sigourney Weaver). 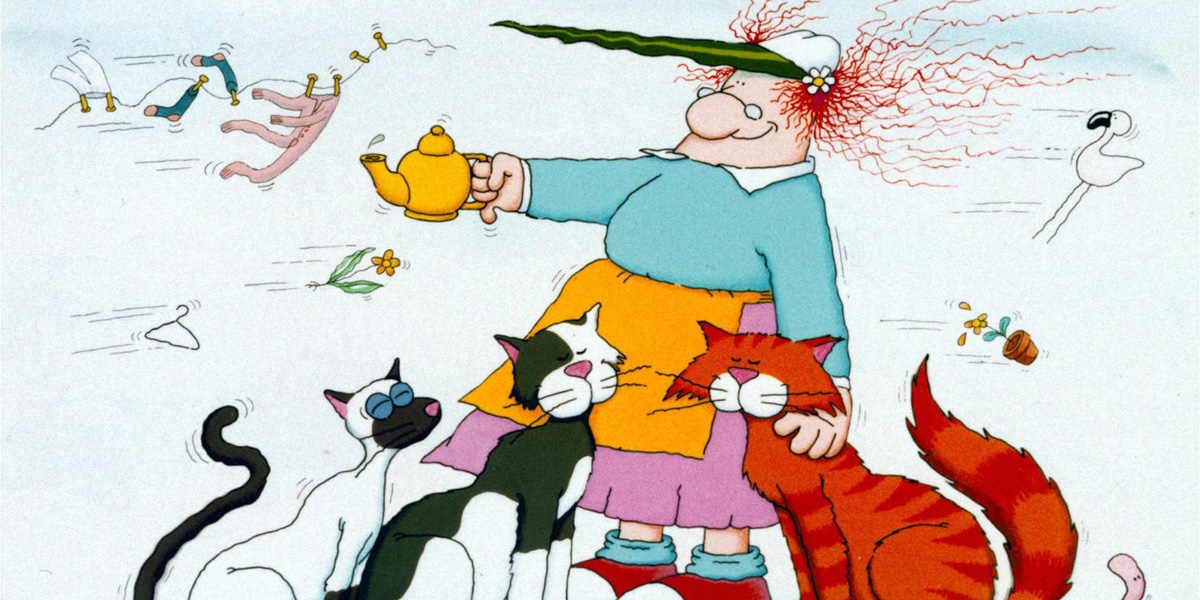 Created by award-winning animator/director Les Drew, this animated short features Doris Dingle and her family of three cats. Sure to appeal to children of all ages, The Dingles shows what happens when an unexpected violent wind disrupts the family's idyllic life. The film is based on the book The Dingles, written by Helen Levchuk and illustrated by John Bianchi.