Skip to content
On a seemingly ordinary date, a couple begins to frankly dissect their relationship, revealing the unexpectedly rocky foundation that it is built upon.

Courageous and emotionally powerful, Fire follows Sita (Nandita Das) and Radha (Shabana Azmi), two women living in New Delhi who are disappointed with their arranged marriages. While Sita is trapped in a relationship with her cruel and unfaithful husband, Jatin (Jaaved Jaafei), Radha is married to his brother, Ashok (Kulbhushan Kharbanda), a religious zealot who believes in suppressing desire. Lonely and lacking in love and passion, the two women begin to seek solace and friendship in each other, only to discover a passionate romantic love that must be kept secret.

When it was released in the late 1990s, Fire’s incendiary subject matter led to protests and government interventions in India. Years later, the internationally acclaimed film is as seductive and moving as ever.

The film won seven awards at film festivals around the world, including "Most Popular Canadian Film" at the Vancouver International Film Festival.

Mehta gained acclaim for her trilogy, Fire, Earth and the Oscar-nominated Water. Her adaptation of Salman Rushdie’s Midnight’s Children was nominated for eight CSAs. She has also directed Bollywood/Hollywood, Beeba Boys, Anatomy of Violence, and many others. Her most recent film Funny Boy has also won multiple awards, including the CSA for best direction. Most recently, she directed an episode of the series Yellowjackets. She has numerous projects in development as a writer, director and producer.

Being a teenager isn’t always easy. 17-year old Lina (Hallie Switzer) is planning a summer holiday visiting her mother’s family in Modra, Slovakia with her boyfriend, when he unexpectedly breaks up with her. Not willing to let it ruin her summer plans, Lina asks Leco (Alexander Gammal), another cute boy from school, to join her on the trip.

While Lina’s Slovakian family assumes they’re a couple, she and Leco start to realize that they don’t have a whole lot in common after all – which doesn’t stop Leco from feeling hurt when Lina steps out with a local boy. An emotional journey of soul searching and self discovery, Modra lets its two young leads gently discover who they are while they navigate the unfamiliar challenges of being far from home.

Helene intends to send her sister to a convent, and when Yvonne falls in love with the rakish Charles (David Boutin), Hélène concocts a scheme to keep them apart by arranging for him to marry her own teenage daughter. Unwilling to give up her passionate desires, Yvonne heads to the woods to find her own solution.

This finely crafted historical drama was awarded Best Feature by the Quebec Association of Film Critics in 2001.

Sarah (Sophie Desmarais) is a gifted young runner whose life changes when she’s offered a spot at McGill – far from her suburban life near Quebec City. But when her fearful mother refuses to give her financial support, Sarah marries her best friend Antoine (Jean-Sébastien Courchesne) in an attempt to qualify for the best scholarships, and they set out for Montreal on their own.

Antoine has feelings for Sarah, but it soon becomes clear that the only thing she truly loves is running. This assured feature-length debut from Robichaud is an unusual coming of age story and a heartfelt and subtle drama about an introverted protagonist’s late-blossoming sexuality.

After its premiere in the Un Certain Regard section of the Cannes Film Festival, the film won the Women in Film & Television Artistic Merit Award at the Vancouver International Film Festival.

“What makes Sarah Prefers to Run so touching is that we're not quite sure what the resolution will be for Sarah. She isn't, either. But she just keeps running.” – Tim Grierson, Paste Magazine

On her 39th birthday, Gaby (Chelsea Peretti) finds that she's hit a crossroad in her life. Fresh off of yet another failed relationship, everyone in her life is asking when she's going to settle down. It doesn't help that as a wedding caterer, she's constantly reminded of this pressure. With the dating scene looking bleaker than ever, Gabye begins to wonder whether she'd be happier if she never finds 'the one'.

Andrea Dorfman’s clever twist on the romantic comedy genre features a brilliant performance from Chelsea Peretti (Brooklyn Nine Nine), who brings a touching depth of character along with her trademark acerbic wit.

After the success of the TV series Due South, Paul Gross went on to create this mainstream Canadian comedy hit, with romance, music (The Tragically Hip appear as a rival team) and, of course, curling.

When Chris Cutter (Gross) returns to his small hometown to bury his former curling coach, he is inspired to reunite the old team and try to win the Golden Broom. Nothing has been the same in town since Chris’s departure 10 years earlier — Chris’s old teammates and his own father (Nielsen) are disappointed in life, and the coach’s daughters Amy (Parker) and Julie (Nolden) have become, respectively, a drunk and an astronaut. Despite the odds, the rag-tag group of misfits unites to compete in the championship, with heartwarming and hilarious results.

Gross starred in the hit TV series Due South and Slings & Arrows. He directed, wrote and starred in Men With Brooms, which won a Canadian Comedy Award, as well as Hyena Road and Passchendaele, which won a Genie for best film. Gross also starred in the mini-series Alias Grace and Caught, the series Tales of the City and Y: The Last Man, and the films Falling and The Middle Man.

This heartbreaking tale of love and loss follows Arjie (Nand as a child, Ingram as an adult), a Tamil child in Sri Lanka, who is referred to as a “funny boy” by his family, because he doesn’t behave like the other boys. He draws inspiration from his free-spirited Canadian cousin to explore his identity, and goes on to pursue his crushes on the boys in his class. When he reaches adulthood, his life, family, and his first real love are all threatened as the Sri Lankan Civil War breaks out and brings about life-changing tragedies and upheavals.

Based on the celebrated novel by Shyam Selvadurai, Funny Boy was nominated for nine Canadian Screen Awards, winning for directing, screenplay and score.

Mehta gained acclaim for her trilogy, Fire, Earth and the Oscar-nominated Water. Her adaptation of Salman Rushdie’s Midnight’s Children was nominated for eight CSAs. She has also directed Bollywood/Hollywood, Beeba Boys, Anatomy of Violence, and many others. Her most recent film Funny Boy has also won multiple awards, including the CSA for best direction. Most recently, she directed an episode of the series Yellowjackets. She has numerous projects in development as a writer, director and producer.

Twenty-one-year-old Ricardo (Boucher) is a screenwriting student in Montreal, where he dreams about striking up a romance with his classmate Marie-Ève (Gosselin). When she announces that she’ll be going on an exchange trip to Italy, Ricardo can only see one option for himself: to follow her — and his heart — on the trip, and perhaps reconnect with his own Italian roots along the way. Of course, nothing on the trip goes as he expects, and connecting with Marie-Ève seems further away than before.

The charming and funny story is based on director Ricardo Trogi’s own coming-of-age experiences, and was a box office smash and winner of the Golden Screen Award (for biggest Canadian box office gross of the year). The film was nominated for 16 Prix Iris awards and won five, including those for best film and best director. 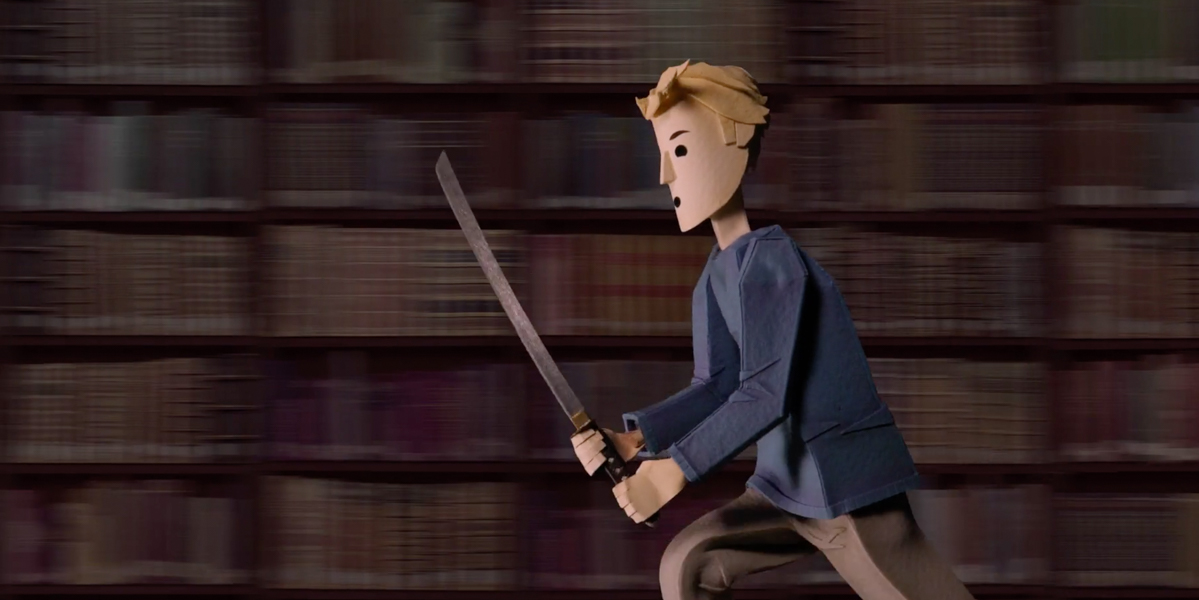 Blending live-action and animation, this short tells the tale of an imaginative teen as he debates the best way to say hello to a cute girl at the library.